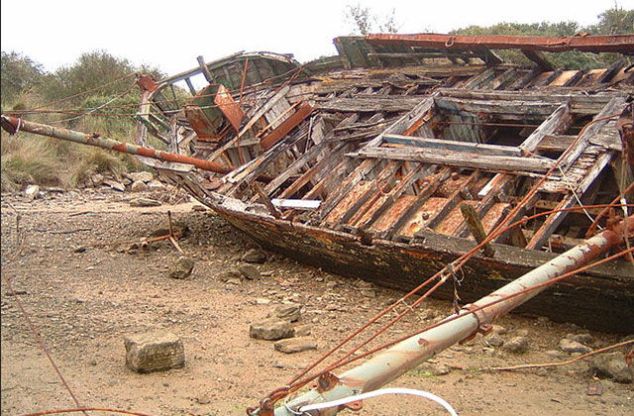 an intensive yearlong search by marine archaeologists. The 109 captives who

arrived aboard Clotilda were the last of an estimated 389,000 Africans delivered into

bondage in mainland America from the early 1600s to 1860. Thousands of vessels

were involved in the transatlantic trade, but very few slave wrecks have ever been

Importing slaves into the United States had been illegal since 1808, and southern

plantation owners had seen prices in the domestic slave trade skyrocket. Many

were advocating for reopening the trade.

into Mobile Bay under the nose of federal officials.

And he did. For more on this amazing story, click on the NatGeo link above.

Discovery News reports that construction crews working at the site of a new London Tube station have uncovered thousands of skeletons and more than 10,000 artifacts during excavations. The building site is located within the precincts of the infamous Bedlam “Madhouse”,  where the city’s first municipal cemetery was located and used from the 1560’s to 1738. Among the interments are Great Plague victims, and archaeologists are interested in  studying the bones to learn more about the evolution of the strain that repeatedly struck London. It is expected to take at least a month to complete the disinterments, and plans are to rebury the bones at a cemetery outside city. It is anticipated that a Roman road will also be brought to light. The results of this investigation, once analyzed, promise to provide a fascinating look at life in one of London’s oldest neighborhoods.

Tired of her job at the British Museum, archaeologist Verity Grey accepts a post in a small fishing village in Scotland. Peter Quinnell, legendary for his unusual theories, is searching for the campsite of a Roman legion that vanished without a trace around 117 AD. His evidence? The young grandson of his caretaker, known to have “second site”, routinely sees the ghost of a Roman sentinel parading about the grounds at night. Verity is charmed by Quinnell, and in spite of grave reservations, commits to helping him on the dig. Soon she begins having some eerie experiences of her own. During the course of the summer, Verity comes to know the big, handsome Scotsman David Fortune. As the dig progresses, she begins to fear that some malevolent, supernatural force may be preventing the dig from succeeding in its goals.

The best feature in this book is its atmospheric setting, which author Kearsley brings to life with evocative descriptions. The plot itself is simple, with a predictible ending. With respect to romance and suspense, both are present but minimal, and characters tend toward types (eccentric archaeologist, philandering smuggler, salt of the earth Scotsman).
Readers who enjoy the books of Mary Stewart or Nora Roberts are likely to enjoy this one. Those in search of something pithier must look elsewhere.

View all my reviews

The  dig at the site of Shakespeare’s last home in Stratford Upon Avon is emerging from its winter hiatus, and is about to begin excavating in parts of the land that have never been previously touched.  Thus far, evidence has been uncovered that challenges the way the house and grounds have been interpreted. Perhaps the most exciting feature of this project is that members of the public are invited to observe and even participate in the work. “The Dig for Shakespeare” is open 7 days a week, until the project closes again in October. There is an admission charge, which includes entry to the Birthplace, Hall’s Croft, and Nash’s House, where there is an exhibit of some of the finds. The ticket is good for a year, enabling visitors to return as often as they like. Further information about this exciting undertaking can be found here.

Time for tales and tea
Art of Mourning
Life...

astitchornine
LIVING WITH MY ANCESTORS

The Conduit Center | a space for meditation and wellness