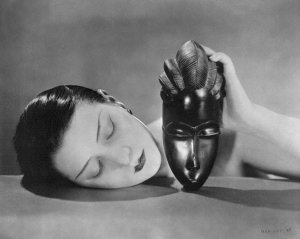 I first learned about Alice Prin, aka Kiki de Montparnasse, while reading Laurie R. King’s novel, The Bones of Paris, a mystery set in 1920’s Paris. Kiki’s story is an intriguing one. She was born in Burgundy in 1901, raised in poverty and poorly educated. She arrived in Paris at age 12, when her mother moved there to find work. Kiki herself worked at a bakery and as a dishwasher, gradually becoming an artists’ model, through which, she said, she had found her “real milieu”. Of Montparnasse she wrote, “People are broadminded and where what would be crime elsewhere is just a pecadillo”. Kiki was no thin little waif; there was meat on her bones and  she was never shy about showing off her face or body. More accurately, it seems, Kiki was never shy about anything; she once landed in jail for slugging a cafe owner and a policeman. She modeled for and provided inspiration todozens of well known artists, and when she became Man Ray’s muse and lover, she quickly became celebrated as a symbol of bohemian Paris. 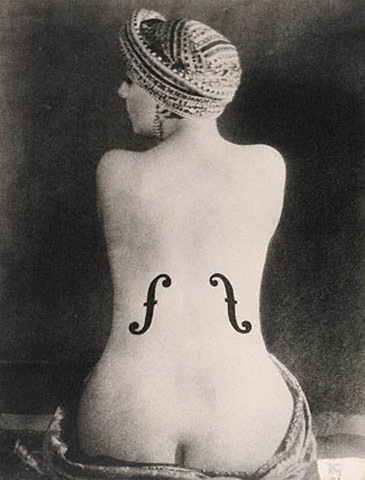 What makes Kiki a “bad girl” is her refusal to be just another artists’ model, instead deciding for herself what her public persona would be. She performed in short, experimental movies, some of them deemed shocking, and sang risque songs in music halls. She demanded the same sexual freedoms that were granted to men, and celebrated her sexuality. In the hundreds of photos that were taken of her, she stares directly out at the viewer. One of her closest friends was Ernest Hemingway, who wrote the introduction to her memoirs, which were considered so scandalous that her books were banned in the U.S. Hanging out with so many major talents inspired Kiki to develop her own creative abilities, and when her paintings were exhibited at Galerie au Sacre du Printemps, they sold out on opening night.

As the era of the 1920’s drew to a close, Kiki fell into a long downward spiral, during which substance abuse and addiction would destroy her health. She died in 1953 at the age of 53. As the “Queen of Montparnasse”,  she was a trailblazer in the quest for women’s freedom to live their lives on their own terms.